Connie and the Good Life

There are solutions for almost anything, but rarely does a single solution work for everyone. We're all different with different requirements and needs, so sometimes it's necessary to search a little further for a solution that's exactly right for the individual. 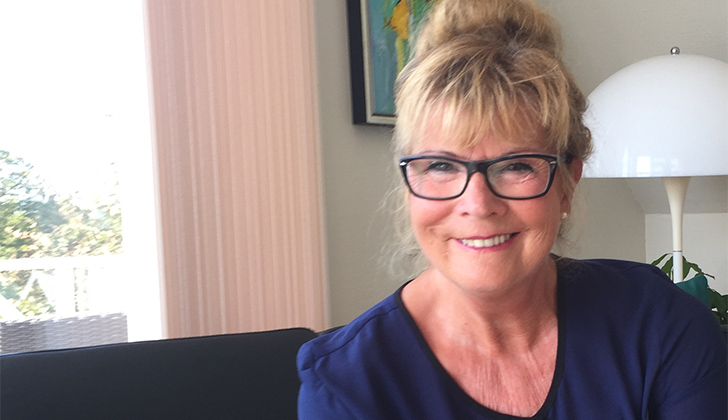 Connie is among those who developed major intestinal problems following a tumor operation on her back, but in the end found the method that brought the Good Life back to her. 66 years old, married and living with her family in a small Danish community, Connie's life has always been filled with physical activity and a fulfilling social life. She has a large circle of acquaintances and often invites family and friends to dinners.

All of these activities were put on hold in the autumn of 2015, when Connie was diagnosed with a benign tumor in her back that put pressure on the nerve paths and tissue. She underwent an operation to remove it.

Eight trips to the bathroom per day

After the operation, even though she had been prepared for the eventuality, Connie developed the loss of bladder and intestine control – a big shock for anyone.

As Connie puts it:  "It is not fun to experience a complete loss of control."

During the period following the operation, Connie was admitted to the Spinal Cord Center in Hornbæk for three months. The reduction in peristalsis resulted in more trips to the bathroom – up to eight times per day – but without complete emptying. Connie could only manage to void small lumps or "worms", despite the fact of her having taken medicine to maintain bowel movements.

Connie learned transanal irrigation (TAI), a drug free therapy that involves irrigating the bowel with water to void, but the balloon required in the therapy would break frequently, sapping Connie's motivation. Due to her major problems with bowel movements and experiences with the broken balloons, a decision was made to instead take laxatives and receive a stoma later on.

Pure joy when it is working

One day, the hospital in Hornbæk contacted Connie and informed her that a new system was available for TAI. The hospital asked Connie if she wanted to test this before taking the extensive stoma operation. Connie immediately made an appointment at the clinic, where she received training in how to use a new TAI system that included a smart application. Connie drove home that same day after testing the system with good results. Finally, an effective solution was in place.

Performing TAI can be a challenge initially, but it helps so much with emptying my bowel – and is so easy to use!

No problem during vacation

Connie uses TAI every day, and it takes thirty to forty-five minutes from start to finish, including assembly of the system, irrigation and cleaning the apparatus after use.

Since gaining familiarity with the new TAI system and becoming completely comfortable with it, Connie has gone on vacation and reentered the swimming pool. Knowing that no accidents can occur while swimming has given Connie immense peace of mind, and she's reinstated the activities in her life that she previously enjoyed.

Give it a little time

Connie thinks it's wonderful to be able to do the simple things on vacation that other people do – like eating lunch with her husband, and taking a trip to the bathroom at her own convenience to perform TAI . . .

She feels she has regained her previous quality of life, such is the extent of her satisfaction with her new routine, and she would definitely recommend using TAI:

My best advice is: give it a little time - everything will turn out really well.