ISCoS Webinar: Reflecting on the past, Planning for the future

We are honoured to have been invited to join the International Spinal Cord Injury Society (ISCoS) in the second episode of their webinar series: 'SCI Care: What really matters'. 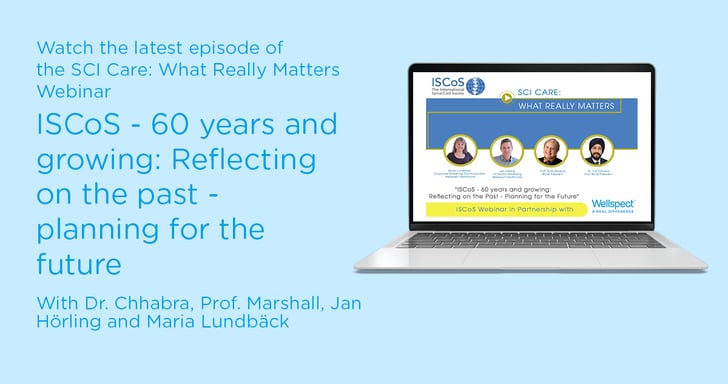 This episode of ISCoS webinar series marks the 60th Anniversary of the society, which has acted as an impartial and leading voice in the study of spinal cord injuries over six decades.

Through this period study and care of spinal cord injuries has developed significantly and the webinar offers a fantastic insight into both past and future in this area.

Wellspect's Vice President, Jan Hörling, and Head of Corporate Marketing Communications, Maria Lundbäck, were invited to join current ISCoS President, Prof Ruth Marshall and past President, Dr Harvinder Chhabra in the discussion. Together they look back over the development of SCI care over the last 60 years before casting an eye to the future study and practice of caring for those living with spinal cord injuries.

We are honoured to have been able to help ISCoS mark such an incredible milestone and invite you to join us in the conversation by watching the webinar:

Supporting those living with spinal cord injuries is at the heart of much of Wellspect's work so we are pleased to have worked closely with ISCoS over the years. Read more about the collaboration between Wellspect and ISCoS.