Rwanda is one of the newest members of IWBF, with the sport only being introduced in the country less than three years ago. 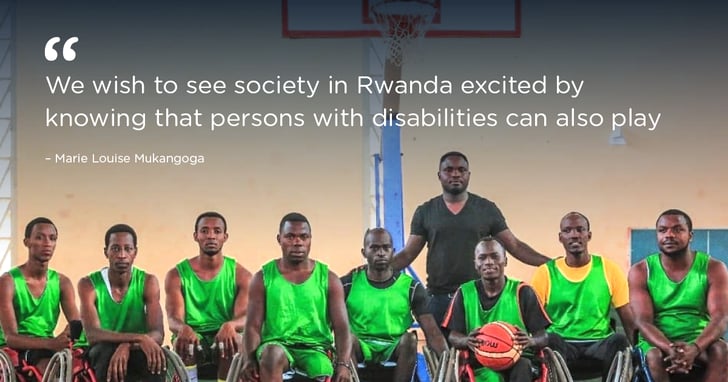 The initiative of developing wheelchair basketball in Rwanda was recommended by Marie Louise Mukangoga after she took part in a two-months training course focusing on social participation and livelihood of persons with disabilities in Japan in 2017. During the training she watched the Okinawa Wheelchair Basketball Team playing a demonstration match and was fascinated by the sport.

Following the trip, Mukangoga, who had played basketball and volleyball at the high school level before her left leg was amputated after a car accident, started mobilizing players around Kigali informing them about the new sport in February 2018. She also approached the National Paralympic Committee of Rwanda (NPC Rwanda) about her project of introducing wheelchair basketball in Rwanda and once she received a green light she immediately started playing with ten players at NPC Gymnasium with the help of local mainstream basketball coaches.

Assisted by the International Committee of the Red Cross (ICRC), who initially donated a set of 24 multisport wheelchairs to help players access the game, she formed two women teams and in the same month an ex-combat veterans’ team also started to play. This was increased by another two more teams, so they currently have five teams and organize an annual National Championship.

We wish to see society in Rwanda excited by knowing that persons with disabilities can also play.

NPC Rwanda supported the development of the sport also by conducting training for 15 coaches and 12 referees of wheelchair basketball. In addition to this training, two athletes attended a coaching course run by the ICRC in Ethiopia. Establishing a knowledgeable workforce through this training helped the five teams to start exercising and practicing wheelchair basketball.

The first official tournament of wheelchair basketball in Rwanda was organized on 3rd December 2018 in order to celebrate the International Day of Persons with Disabilities (IDPD). Five teams registered and took part in the tournament: two women’s teams – Inkuba WB and Inkwakuzi WB; and three men’s teams: Vision, Dynamic, and Veterans WB.

Although COVID-19 restrictions have delayed their planned programs, RWBF has a busy schedule planned for when the Ministry of Sport allows them to return to sport.

Looking ahead, RWBF has great hope for the sport both on and off the court, Mukangoga said:

Also, we wish to see the society of Rwanda excited by knowing that persons with disabilities can also play not only for recreation but also for competitions which will be a result of mindset change on the ability of persons with disability in Rwanda; to see that wheelchair basketball can be benefiting athletes and staff, etc, both socially and economically. Currently most of the wheelchair basketball players are not using wheelchairs in their daily life for their mobility and we will identify more players who are using wheelchairs for their mobility.

For 2020, due to the Covid-19 pandemic, the federation has not been able to continue its activities as it was planned in the action plan, but we hope to back on the court and make efforts to move forward. We would like to thank all our different partners including IWBF who supported the federation to help us reach this far.

This article was initially written by IWBF and published in their Newsletter.