How I keep my positive outlook after a spinal cord injury

Incredible energy and positivity. This describes Layth, 44, who sustained a spinal cord injury 5 years ago while bike riding with his friends around the Bamburgh Castle area. 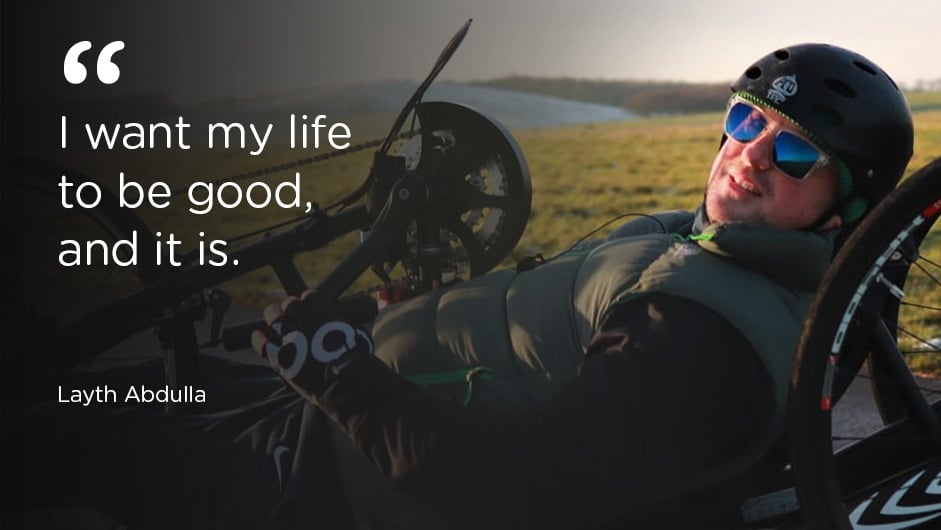 We spoke to Layth on a dark, wintery day. It was snowy and cold outside, cosy and warm inside. Despite the cold, Layth had already been outside twice – first, to train for an upcoming fundraising cycling event and second, to take his kids sledging.

Layth was up for the wintery challenge, despite his handcycle repeatedly getting stuck in the snow. It would never cross Layth’s mind to miss his training session, as he would soon be taking part in a charity bike ride of 42 kilometers to raise money for a friend who lost a relative to Covid-19.

Nor would Layth miss an opportunity for fun in the snow with his young kids:

"They didn’t want to go. But I said: Come on, we have snow, you’re not in school, let’s go sledging and seize the moment! I don’t want to miss those chances with my kids." And that attitude perfectly sums up Layth’s appetite and energy for life. 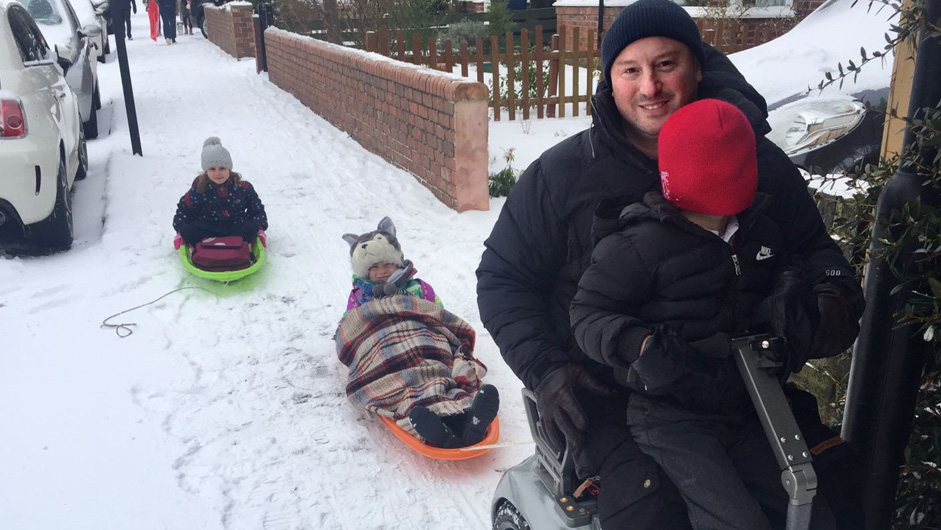 Layth out in the snow with his children

After Layth’s accident, he did experience some difficult times, and it took him a while to recover a positive perspective on life and his future. During the weeks he remained in hospital, Layth dedicated himself to his recovery, doing as much physio and rehab as he could to get stronger. After 10 weeks in the spinal center, he was able to return home to his wife and kids.

“I have a support network including my family, for which I am truly grateful and this helps me to always look at the bright side of life and see the positives”. Cultivating this mental attitude helped Layth to navigate the difficult weeks and months following his accident.

Damage to the nervous system, such as Layth had sustained from his spinal cord injury, can impair bladder and bowel function. During his rehabilitation process, Layth was offered Transanal Irrigation (TAI) as a therapy to manage his bowels. With his usual positivity, Layth fully embraced it!

But it wasn’t easy at first – everyone’s body is different, and Layth experienced difficulty in finding a comfortable angle to insert the catheter. His hamstrings were a bit tight, so stretching gave him the flexibility to reach down and bend his body at the waist to reach an angle to allow for the insertion of  the catheter for irrigation. He also found that shower chairs with a front entry cutaway on the seat supported easy access for insertion.

Once he had found the optimal set up, the actual therapy of TAI was quickly and easily adopted. At first, he tried a manual system, and was later given the opportunity to try Navina Smart, an electronic device for irrigation. As one of the first patients to try Navina Smart at the St James Hospital Spinal Centre, he considers himself to be incredibly lucky:

I thought Navina Smart was very clever. It was all electronic. You could set up a required amount of water, balloon size etc and then just press the button… everything was done for you. It was so easy . . .

Five years after the accident, Layth still uses Navina Systems to manage his bowels, alternating between Navina Smart (electronic system) and Navina Classic (manual system). Each system offers a benefit that allows Layth to fit irrigation of the bowel into his lifestyle. Nothing, especially his bowels, stops Layth from fully enjoying his life.

Now he thinks about his future in typically positive terms full of plans to execute and things to achieve.

I want my life to be good, and it is.

Nothing extraordinary – I'm happy with an ordinary life

To learn more about Transanal Irrigation with Navina, you can download our guide using the button below: