It can be difficult to find a regular toilet routine if you suffer from chronic constipation or fecal incontinence. Some people are constantly afraid of public accidents or literary spending hours in the bathroom.

Mikey was one of them until he found the solution to his bowel problems – transanal irrigation (TAI). This blog post will give you an insight! 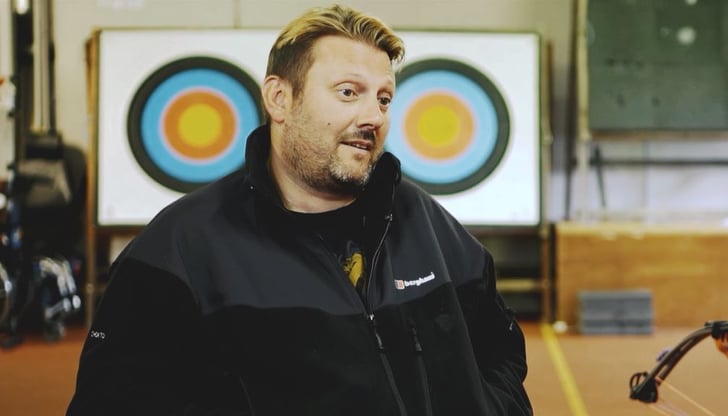 Mikey became spinal cord injured during an assault course in the army. The participants wore rucksack, webbing and helmet. On the last obstacle his rucksack got stuck on a rope bridge and he fell down on his back. He cracked two bones in his neck, and fractured his spine in seven places.

"They had to put a titanium plate into my neck, bone graft on my hip and they had to fuse me all together", Mikey explains.

That was in year 2000, and since then Mikey has struggled with his bowel.

"Before I started with transanal irrigation my bum ruled my life. I sometimes had accidents when I went out. I mean, I'm an adult... I used to have these accidents when I was a baby, it shouldn't happen now", Mikey says.

Transanal irrigation is a way of flushing your bowel with lukewarm water. A small balloon serves as a stopper and keeps the water in your bowel. The water softens the stool and causes peristaltic movements in your bowels, which is the bodies way of pushing the stool towards the rectum to be evacuated.

When the balloon is removed, the water/stool comes out in the toilet.

With this method more of the bowel is emptied – not only the lower part as with an enema– which means that you don't need to go to the toilet as often. This not only prevents fecal incontinence, but also gives you control over the time and place of emptying your bowel.

Irrigation with water is a safe way to empty the bowels. It can save a lot of time and frustration when conservative alternatives such as diet, lifestyle changes and stool modifying medicine aren't working properly.

"It took me 16 years to find out that there are alternatives in the market, which I should have been told right away", Mikey states.

Used routinely, TAI establishes a predictable pattern for emptying the bowel which can restore a sense of control, but also a sense of dignity and freedom. And it helps maintain the bowel system in a healthy working order.

Frequency of treatments varies depending on individual needs – for some people, it may be needed daily, for others every other or third day. The pattern best suited for each person is decided in consultation with a healthcare professional.

"There is a bit of a learning curve, but it’s a lot better now", Mikey says. "This method makes me more confident."

To read more about Mikey, go to the blog post How I became a Paralympic archer!